Traveling through Iran to film a public-television show, I quickly filled up my notebook with quirky observations. One moment, I saw propaganda murals encouraging young men to walk into the blazing sunset of martyrdom. The next, a woman in a bookstore served me cookies while I browsed through the books, admiring one in particular. Then, when I was about to leave without buying anything, she gave me the book for free.

While English is the second language on many signs, the squiggly local script looked like Arabic to me. I quickly learned that it’s actually Farsi. Iranians are Persian. Persians are not Arabs, and they don’t speak Arabic — they speak Farsi. This Persian/Arab difference is a very important distinction to the people of Iran. My film crew and I heard over and over again, “We are not Arabs!”

The numbers, however, are the same as those used in the Arab world. Thankfully, when I needed it, I found that they also use “our” numbers.

Iran is a cash society. Because of the three-decades-old American embargo here, Western credit cards don’t work. No ATMs for foreigners means that we have to bring in big wads of cash…and learn to count carefully. The money comes with lots of zeros. One dollar is equal to 10,000 rial. (If you exchange $100, you are literally a millionaire here.) A toman is ten rial, and some prices are listed in rial, others in toman…a tourist rip-off just waiting to happen. I had a shirt laundered at the hotel for “20,000.” Is that in rial ($2) — or in toman ($20)? Coins are rarely used, and there are no state-issued large bills. Local banks print large bills to help local commerce. To tell if a bill is counterfeit, you rub the number with your finger — if it’s the real deal, the warmth makes the numbers momentarily disappear.

People here need to keep track of three different calendars: Persian and Islamic (for local affairs), and Western (for dealing with the outside world). What’s the year? It depends: After Muhammad — about 1,430 years ago, or after Christ — two thousand and some years ago.

The Islamic government regulates women’s dress and public behavior. Men are also affected, to a lesser degree. Neckties are rarely seen, as they’re considered the mark of a Shah supporter. And there are no urinals anywhere. (Trust me. I did an extensive search: at the airport, swanky hotels, the university, and the fanciest coffee shops.)

Americans visiting Iran need to be with a tour or private guide. My guide made sure I was eating in comfortable (i.e., high-end) restaurants, generally in hotels. I wasn’t wild about the food on my first trip here in 1978. It’s much better now…but still not very exciting. (Some country has to keep Norway company at the bottom of the cuisine rankings. With Norwegian heritage, I speak from experience.)

Restaurants use Kleenex rather than napkins; there’s a box of tissues on every dining table. Because Iran is a tea culture, the coffee at breakfast is always instant. Locals assured me that tap water is safe to drink, but I stuck with the bottled kind.

Iran is strictly “dry” — absolutely no booze or beer in public. While I kept ordering a yogurt drink, would-be beer-drinkers seem to long for the real thing: Local guys drink a non-alcoholic “malt beverage” that tastes like beer, comes in a beer can, and, I imagine, makes them feel manly.

In a lot of ways, visiting Iran is like a Cuban cigar…it’s a big deal mostly for Americans. There are Western tourists (mostly Germans, French, Brits, and Dutch). In fact, the Lonely Planet guidebook to Iran sells reasonably well and just came out in a new edition. Most foreigners I met were on a tour, with a private guide, or visiting relatives. Control gets tighter and looser depending on the political climate.

I can’t help but think how tourism could boom here if they just opened this place up. Once, while stuck in a Tehran traffic jam, the man in the next car asked my driver to roll down his window. He passed over a bouquet of flowers and said, “Give this to the foreigner in your back seat and apologize for our traffic.” And when Iran does open up for tourism, experiences like this lead me to believe that its people will be the biggest draw. 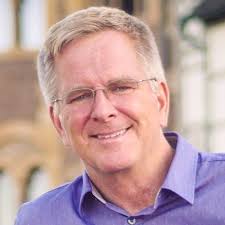 Guidebook author and travel TV host Rick Steves is America’s most respected authority on European travel. Rick took his first trip to Europe in 1969, visiting piano factories with his father, a piano importer. As an 18-year-old, Rick began traveling on his own, funding his trips by teaching piano lessons. In 1976, he started his business, Rick Steves’ Europe, which has grown from a one-man operation to a company with a staff of 100 full-time, well-travelled employees at his headquarters in Washington state. There he produces more than 50 guidebooks on European travel, America’s most popular travel series on public television, a weekly hour-long national public radio show, a weekly syndicated column, and free travel information available through his travel center and ricksteves.com. Rick Steves’ Europe also runs a successful European tour program. Rick Steves lives and works in his hometown of Edmonds, Washington. His office window overlooks his old junior high school.